CSpOC/18th Space Control Squadron report that the CZ-5B rocket booster 2021-035B met a fiery end at 2:14 UT last night (May 9) over the Arabian peninsula and Indian Ocean. China reports reentry at 2:24 UT in the Indian Ocean near the Maldives

In the map above, I have plotted the approximate final trajectory (based on a SatEvo-evolved orbit propagated to reentry) and both the reentry locations reported by China (2:24 UT, 2.65 N, 72.64 E, in the Indian Ocean near the Maldives) and by CSpOC/18th Space Control Squadron (2:14 UT, 22.2 N 50 E, over the Arabian Peninsula).

Note how within minutes of the reentry, the rocket passed over the city of Riyahd in Saoudi-Arabia!

In looking at the plot, one should realize that a reentry is not an instantanious moment, but a process stretching over many minutes, where the object starts to break up and fragments burn up in the upper atmosphere. During this process, the object continues to move over a swat of trajectory that can be hundreds to a few thousands of kilometers long. It is very likely that this proces started over the Middle East or even over the Mediterranean already [edit: imagery from Jordan suggest that the object was still intact when passing over that location, but see a potential video from Oman below]. If fragments survived, they are scattered somewhere along the yellow line in the map, within the current uncertainties of the reentry location.

The video footage in the tweet below appears to show the (start of the) reentry, imaged from Oman, but is unverified for now:

I have tried, by fiddling with the area-to-mass ratio for the rocket in GMAT, to create a reentry trajectory that would match a splashdown in the Maldives around 2:24 UT, as reported by China. The closest I can get to the location reported by China is this result:

Of course, this is a simplified model (the proverbal "spherical cow in a vacuum") that does not take into account both mass loss from ablation and fragmentation over the reentry trajectory.

It however suggest that, if the time and location reported by China is right, the rocket stage would have been at an altitude of ~100 km around the position and time reported by CSpOC (the US military tracking network). It could be that the CSpOC position, with the quoted very small uncertainty in time of +- 1 minute, is based on a SBIRS satellite detection of the fireball (we have long suspected that TIP's with such 1-minute uncertainty quotes are based on satellite detections of the reentry fireball).

About 100 km is a fair altitude for the ablative phase to start, similar to the altitude at which meteoric fireballs start. If the video from Oman above is the real deal, it is indeed suggested that ablation (and break-up) was starting over southern Arabia.

As a further update: interesting information about infrasound detections of the reentry from Djibouti, with source over the Arabian peninsula:

#CTBTO #IMS infrasound station IS19 #Djibouti🇩🇯 recorded an emergent, low-frequency signal of an object traveling at ~10000 km/h, compatible w/ re-entry of part of the #LongMarch5BRocket 🚀 over Arabian peninsula on 9 May @ 2:15 UTC & splash down in #IndianOcean near #Maldives pic.twitter.com/mlUlxtDI4b

(below is the  pre-reentry  version of this frequently updated post): 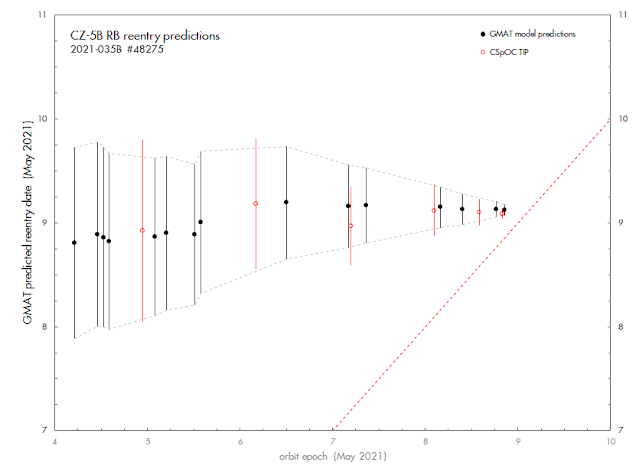 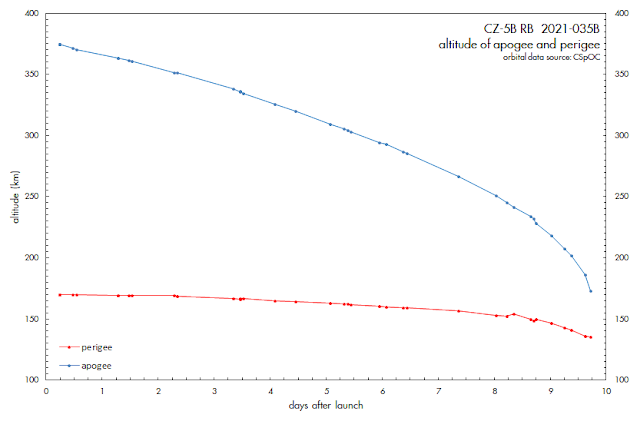 The massive CZ-5B core stage from the CZ-5B rocket used for this launch was left in a 375 x 170 km orbit. Like it's predecessor that flew in May 2020, it was not deorbited after payload release. This likely means that it will come down in an uncontrolled reentry somewhere on May 8 or 9. 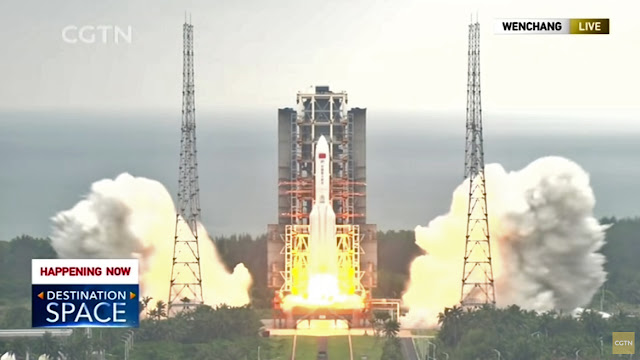 The informal Space industry standard for objects that are heavier than 10 tons, and launched into Low Earth Orbit, is to have a deliberate deorbit over an empty stretch of Ocean. This did not happen with the CZ-5B core stage from the 5 May 2020 launch a year ago, and does not seem to happen now following the Tianhe-1 launch either.

An uncontrolled reentry of an object this large and heavy means that sizable fragments can survive reentry and reach the surface of the earth, with the risk that this happens over inhabited parts of the world. This is not something that you want, from safety concerns. Several analysts have gone on the record calling the lack of a controlled reentry for the CZ-5B core stage 'irresponsible' for that reason.

Indeed, there are risks. For example, sizable fragments from the core stage of the previous CZ-5B launch, that also came down in an uncontrolled reentry, rained down on well populated parts of Ivory Coast in Africa in May 2020.

With the first lauch and uncontrolled reentry of a CZ-5B core stage a year ago, the question was whether a deliberate deorbit was planned but failed, or whether the CZ-5B core stage simply does not have a deorbit capability. As history now seems to repeat with this second CZ-5B launch, it starts to look like the CZ-5B indeed has no deorbit capability. This is highly surprising, and, indeed, irresponsible imho.

At the same time, while there is a risk (see what happened a year ago in Ivory Coast), the risk should not be overstressed. The risk that a random passenger aircraft ends up falling on your house is still orders of a magnitude larger, and we all have come to accept that risk.

We should also realize that much of the 17 to 22 tons mass of the stage will burn up before it reaches earth surface. Moreover, as a large part of the Earth consists of Ocean, it is likely that it will come down harmlessly over some Ocean.

Yet, it cannot be excluded that it will come down over a populated area, so some worry is justified. With an orbital inclination of 41.5 degrees, locations between 41.5 N and 41.5 S are in the danger zone for this reentry. The danger is slightly elevated at the extremes of this (41.5 N and 41.5 S). The latitude range where the CZ-5B booster can come down includes the whole of the United States, Australia, Africa, the southern parts of Asia and much of southern America. Europe is mostly safe, except for Spain, Italy and the Balkans:

When the reentry happens, the rocket stage will break up in the atmosphere and any surviving parts that have not burned up completely will rain down along the ground path along a very long stretch of earth: the area where fragments fall down can be hundreds of kilometers long.

The diagram in the very top of this post gives reentry predictions. I will update it every time I run a new prediction. Below are the same predictions in table form. They are based on modelling of the orbital evolution in the General Mission Analysis Tool (GMAT).

Modelling is done for a mass of 17 tons (note that the true dry mass of the rocket stage is a bit uncertain: quoted values range between 17 and 22 tons, depending on the source) and with a drag surface at 60% of the maximum surface, as I have found that this generally fits well with tumbling rocket stages (which as a result of the tumbling have a variable drag surface).

Each new prediction is based on a new orbital update from CSpOC. The MSISE90 model atmosphere is used, with past, current and estimated future Space Weather.

Note that these predicted reentry times are nominal values only. PLEASE NOTE THE VERY LARGE UNCERTAINTY IN THESE TIMES!

The uncertainty margins shown are calculated as 20% of the time between the orbital epoch on which the prediction is based, and the predicted reentry time.

Note that the nominal position shown is only nominal: it is for the center of the uncertainty interval, but as long as the uncertainties in the reentry time measure in the hours, it is basically meaningless.

Within the 2 hour wide uncertainty window of the current CSpOC TIP (9 May 2:04 UT +- 1 hr), which no doubt is more reliable than my amateurish efforts, the rocket stage can come down anywhere on the lines drawn in the map above (the lines show the rocket's trajectory over the uncertainty window). Within the risk window, the trajectory runs over central America, southern Europe, Arabia and the southern tips of Australia. China itself now appears to be out of the risk zone, ironically enough. The nominal point (but: with such a wide uncertainty that it is still basically meaningless!!!) is over Spain

The yellow dots in the map are those cities with populations of a million or more between 41.5 N and 41.5 S.

Other sources of predictions:

Most notably: Space-Track (the CSpOC portal: requires an account), which should be regarded as the most authoritive one.

...and otherwise: Joseph Remis on Twitter, and Aerospace Corporation

(note how all of these give somewhat differing forecasts: which shows you how difficult these reentry forecasts are!)

Several years ago I wrote a FAQ about reentries, and reentry predictions, that might answer any questions you have.

I will update this post with new data when I have the opportunity.