Flight MH17, satellite data and yesterday's hearing of Dutch Parliament with the Dutch Safety Board

Yesterday I posted (in the context of what appears to refer to SBIRS detections of the recent aircraft crash in the Sinai) on lingering questions with regard to potential US military satellite data on the shootdown of flight MH17 over east Ukraine in July 2014. I blogged about this a year ago too.

Yesterdays recapitulation was timely in many ways, as yesterday afternoon saw a special hearing between Dutch Parliament members and the Dutch Safety Board (DSB), the agency which investigated the tragedy. The latter published its report on their finding in October, leading to yesterday's special Parliament hearing. Several Dutch MP's questioned the DSB representatives about what they perceive as ambiguities and missing information in the report. Among them, potential satellite data. 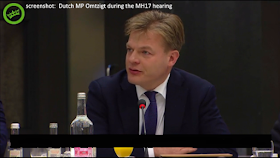 Dutch MP Pieter Omtzigt especially focussed  on potential US military satellite data (including SBIRS data) in his questions, partially basing his information on this very blog. For those of you who understand Dutch, the most relevant of his questions pertaining to satellite data start at 10:30 in the video snippet at this link.

The answers by the DSB representatives were interesting: they seem to indicate that there are indeed satellite data, although it was not entirely clear what satellite data they were talking about: SBIRS IR detections of the missile launch and ascend trajectory, or KH-11 optical imagery of the relevant parts of the Ukraine before and after the shootdown. Their answers also seem to indicate that DSB members were given access to these data, but cannot publicly report on it because "State Secret"...

For truth finding, these data are extremely important. They are likely much less ambiguous than the reconstructions from the missile impact damage to the aircraft on which the DSB report is basing the reconstructed launch location of the missile. As a Dutch citizen, the country that lost 198 citizens in the tragedy, I sincerely hope that the US government does the right thing and will eventually release enough of these data to confirm where the missile that killed so many innocent men, women and children was launched from. That would be the only ethical and humane thing to do. In a democracy, especially where truth finding is concerned, some things are more important than upholding secrecy, certainly in connection to such a terrible tragedy as this involving the killing of such a large number of citizens of a long time US ally.