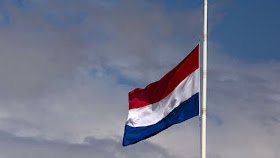 Yesterday 17 July near 13:15 UT, 298 people including at least 173 189 192 of my countrymen perished when Malaysian Airlines flight MH17 on its way from Amsterdam to Kuala Lumpur crashed over the eastern Ukraine, reportedly after being hit by a missile.

This is a terrible tragedy. Among the victims are complete families, including children. It is the start of the holidays in the Netherlands, and the flight carried many Dutch families on their way to their holiday destinations in southeast Asia. My thoughts are with these highly stricken families.

For me personally, it is an unnerving fact that I was about to fly the same route from Amsterdam to southeast Asia only a few days later.

In the wake of the incident, accusations fly between the Ukrainians, pro-Russian separatists and Russians, all accusing each other of being responsible for this tragedy. At the moment it is difficult to say which bits of information floating around are true and which are false. I strongly suspect that the current suspicion against Russian-backed separatists will hold though. Some less ambiguous evidence (e.g. the location of the crash, which is close to the locations where separatists earlier downed two other (military) aircraft) certainly seem to suggest this. But we will see: at the moment, nothing is certain.

Of interest to this blog, is that US Intelligence officials have confirmed that the aircraft was hit by a surface-to-air missile, according to several US media. Senior US officials appear to have told CNN that they detected a radar signal from a surface-to-air missile system being turned on right before the crash, and that they also detected a 'heat signature' at the time the aircraft was lost.

If the CNN report is correct, it is highly likely that the 'heat signature' detection was a space-born detection by the SBIRS system of infra-red early warning satellites. I have written about this satellite system before, in the context of that other recent tragedy with a Malaysian Airlines flight, the disappeared flight MH370. 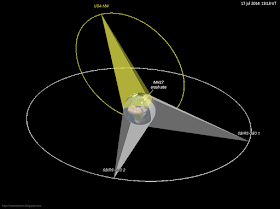 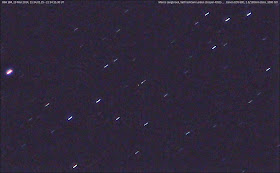 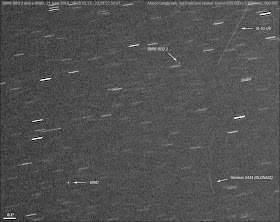 It is possible that the quoted detection of a missile radar tracking system activation around the time of the disaster was done by satellites too. Several SIGINT and ELINT satellites cover this area, including various MENTOR (ORION) satellites and one MERCURY satellite in GEO, and USA 184, which is both a TRUMPET-FO SIGINT satellite and a SBIRS platform, in HEO. That these SIGINT satellites amongst others serve to detect and monitor signals from military radar and missile systems, is known. Given the interest of the USA and NATO in closely watching military developments in the Ukraine conflict, it is almost certain that some of these are targetting the area.

The question is, whether these satellites can help pinpoint the location from where the missile was launched, and hence provide an indication of who did it (Ukrainian forces, separatist militia, or the Russians).

I suspect they can. If the SIGINT detections were indeed done by satellites, it is known that the US recently made large progress in geolocating the origin of detected signals. In a speech from September 2010 available on the NRO website, NRO director Bruce Carlson specifically remarked on the NRO's increasing capability to geolocate using SIGINT:

"I will tell you that just in the last 24 months, we’ve improved the accuracy of geo-location by nearly an order of magnitude, and we’re going to continue to do that and bring it down. We’re getting to the point where here very, very shortly, within the very near term, we will be able to target using signals intelligence".


If they indeed have a SIGINT detection of the missile's radar system (and the CNN quote seems to say that), the character of the signature might yield information on what missile system was used (i.e. if it was indeed an SA-17/BUK).

Likewise, and although as far as I know no exact public information is available on the accuracy of this kind of detections (update: but see the update at the end of this post!) , I suspect that the  'heat signature' detections of the missile launch,  if indeed SBIRS infra-red detections, are also accurate enough to geolocate the launch site (and whether that is in Ukranian held, or separatist held territory).

A SBIRS platform has two sensors: one in staring mode, and one in scanning mode. The staring scanning mode sensor watches for heat signatures over a wide semi-global area. The scanning staring sensor targets specific regions, and when the staring scanning sensor detects a signature, the scanning staring sensor (at least according to some sources) can be employed to further pinpoint and track this event (more sources amongst others here, here and here). The goal of SBIRS reportedly is to be able to track launches, pinpoint launch sites and accurately predict potential target locations from the tracking data. That needs quite accurate tracking.

(note added: a 1-hour timezone conversion error in the original version of this post has been corrected)

Update 19/07/2014: Daniel Fischer managed to dig up this unclassified presentation from 2006, which shows that SBIRS indeed can detect SAM. Pages 2 and 3 mention the capability to pinpoint the launch location.