WOWOWOW!!!! A SPECTACULAR view of the SpaceX Starlink satellite train! 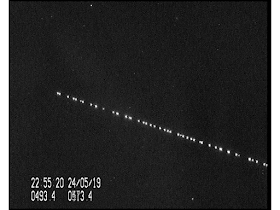 On 24 May 2019 at 2:30 UT, SpaceX launched STARLINK, a series of 60 satellites that is the first launch of many that will create a large constellation of satellites meant to provide global internet access.

Just short of a day after the launch, near 22:55 UT on May 24, this resulted in a spectacular view over NW Europe, when a "train" of bright satellites, all moving close together in a line, moved across the sky. It rained UFO reports as a result, and the press picked it up as well.

There were no orbital elements for the objects available yet on Space-Track, but based on the orbital information (53 degree inclination, initially 440 km orbital altitude) I had calculated a search orbit and stood ready with my camera.

My search orbit turned out to be not too bad: very close in sky track, and with the objects passing some 3 minutes early on the predictions. And what a SPECTACULAR view it was!

It started with two faint, flashing objects moving into the field of view. Then, a few tens of seconds later, my jaw dropped as the "train" entered the field of view. I could not help shouting "OAAAAAH!!!!" (followed by a few expletives...).

Here is the video I shot, be prepared to be mind-blown!

The video was shot, in a partly clouded sky, with a WATEC 902H low-light-level surveillance camera, equipped with a Canon FD 1.8/50 mm lens. I could count at least 56 objects in the original video.

Over the coming days the "train" of objects will be making 2-3 passes each night. As they are actively manoeuvering with their ion thrusters, they will be more spread out with each pass, so the "train" will probably quickly dissipate.

The objects were launched into a ~440 km altitude, 53 degree inclined orbit. Using their ion thrusters, they will raise their orbits to ~550 km the coming days/weeks.